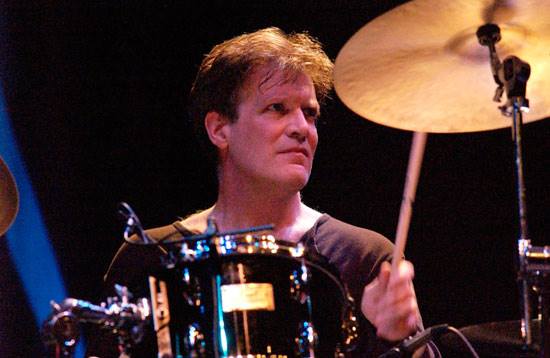 So after our stint in New York City, which marks the half way point in our US tour, we said goodbye to John Marshall who had to go back to England and we set off on the long drive to Canada where we were to meet Gary Husband who is playing drums with us for the rest of this leg of the US tour. Gary last played with us in July in Japan, but that time on piano and keyboards, alongside the four of us. He is a supremely talented musician both on drums and keyboards and apart from playing in John McLaughlin's band for the last 9 years, has played with Allan Holdsworth, Billy Cobham, Gary Moore, UK, Mike Stern, Level 42 and many others.

We did the drive to Toronto over two days. It was a cool trip. Heading north west through New York (which is actually about the size of England!), we drove through Yonkers, along the Hudson River, over the Tappan Zee Bridge (soon to be renamed), past Nyack and the Catskills mountains. It is a beautiful part of the world, very green and lush and I’d like to come back and visit it sometime. We drove past Bethel which is where the famous Woodstock festival of 1969 actually took place. It was supposed to be in Woodstock itself, but objections by local residents and the town made it impossible. However, the posters and publicity had already been done so they relocated it nearby up the road. And of course whilst the organisers assured locals that up to 50,000 people would attend, it ended up being around 400,000 people!

We stayed the night in Batavia, which sounds like it is in Eastern Europe but is actually in Western New York. We passed some amusing signs on the way like ‘Car wash and dog wash’, and the most exciting thing in one local store was a sign for ‘New biscuit bowls’. The following morning, John and I went for a walk (10,100 steps according to my phone), and we found a beautiful peace garden. Batavia actually has historical significance as in 1812 the USA made its first declaration of war on another nation - on Britain. It was about trade, territory and general hostilities which had been increasing. The British invaded the USA, blockaded the entire Eastern coast and burnt down Washington and Buffalo. The American military retreated to Batavia where it regrouped before fighting back.

We then drove on to Toronto to the hotel to meet Gary and then to the gig which was located in a funky part of town. We set up and had to rehearse with Gary as he had not played the tunes with us before, at least not on drums and several of them never before. He got everything instantly as he is so amazingly good and had done his homework too. Beledo also had to rehearse as he was playing with a different trio to his regular one, a drummer he played with 30 years before and a bass player he had never met!

The club was a typical rock club, called the Garrison. It is the type of black box venue, a bit grungy and with a very small dressing room. The stage was quite small and quite high off the floor with a low ceiling so it was a little cramped and the onstage sound was pretty loud. The place did however have a very good sound engineer who was very helpful. Before the gig a few of us went to a nearby cafe where there was a spectacularly unbothered waitress, whose service was so bad, it was hilarious. There was a good sized crowd, the gig went very well and Gary was fantastic. Notable highlights for me were the tricky Out Bloody Rageous (with its 15 beats in each bar) which locked in nicely, Hidden Details and Gesolreut. Poor Leonardo, our manager, suddenly got unwell with shivers and shakes and looked rough though he still managed to do everything he needed to do. I hope he gets well soon. Tomorrow we travel back across the border to the US and to Buffalo. We pass very near the Niagara Falls, and we may or may not go and see them.

Soft Machine, Posts from Across the World